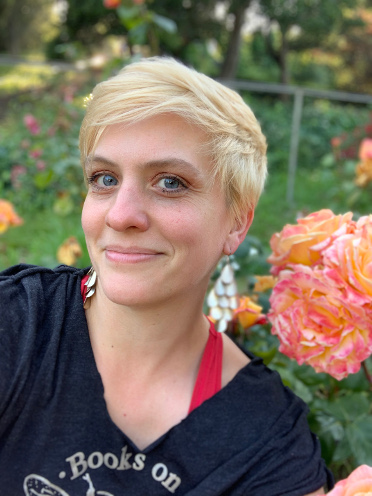 Greetings, KPFA listeners! I’m Karina Stenquist and I’m asking for your vote — for myself and for my Rescue-Pacifica allies. As KPFA enters its 71st year, we aim to ensure that the station remains a vital, innovative source of news, music and more. In addition to journalists and political activists, our talented candidates also include a radio-transmitter engineer and an actress / voice-over artist. Read more about us at www.rescuepacifica.net.

With the concentration of media into fewer and fewer hands than ever before, the need for independent, community-controlled broadcasting is greater than ever. Media outlets like KPFA offer the people of Northern California information they can’t get from corporate-sponsored outlets that keep reproducing the same old story lines.

I’m a Bay Area native who grew up in Kensington, proud daughter of a public school teacher. I graduated from UC Berkeley in 2002 with an interdisciplinary degree focusing on political theory, and also have an MA in Broadcast Journalism and Public Affairs from American University. I’ve done freelance writing and video production during several years living in Spain, and worked in RT network’s Washington newsroom.

In Washington, D.C. I stepped out of grad school and into political action during the Occupy movement: helping to produce a print newspaper, and teaching people how to report on their communities. Back in the Bay and active in the Democratic Socialists of America, I’m currently working as a bartender (as AOC knows, it’s better than polling for understanding people’s concerns!).

After living away from California for 12 years, I’ve appreciated community media like KPFA helping me re-acquaint myself with what is happening around the Bay. If elected to the Local Station Board, I will do my best to ensure that KPFA remains a community-focused institution: that means the airwaves must be open to the many, not limited to the few. Media must be for kids, for elders – for listeners, and storytellers, from all walks of life – rather than being limited to a special class of “professionals.” KPFA’s First Voice Apprenticeship Program epitomizes that commitment to a diversity of voices.

My involvement in Occupy, and in DSA, also taught me the importance of practicing democracy, not merely talking about it. Every day, we see the ill effects of concentrated power, especially executive power. The most important decisions at KPFA — what programs to air — should be subject to thoroughly democratic processes, including the return of KPFA’s Program Council.

For a community to organize, to grow, to fight, to learn, it needs to hear itself; it needs media that reflects the conversations on the ground, not just in the halls of power. We need to hear our neighbors, our students, our houseless, our struggling, our champions, our scholars. But we can’t trust corporate media to reach out to parts of our community that are locked in battle against corporate powers. If you agree, please support the Rescue Pacifica candidates, to ensure a dynamic and independent media outlet for the Bay Area.