History records that the infamous Senator Joe McCarthy died in 1957, but did his ghost haunt the March meeting of KPFA’s Local Station Board?

McCarthy gained his notoriety in the early 1950s with charges that Communists had infiltrated the State Department and the U.S. Army. At the KPFA LSB meeting, the targets were Greens, not Reds, but a conspiratorial tone was in the air. The accuser was board member Don Goldmacher, and his targets were two of his fellow board members, James McFadden and Christine Pepin. Those two also serve on the Green Party County Councils in their respective counties (Alameda and Santa Clara).

At the meeting, Goldmacher asked:

“Why does the Green Party in the Bay Area actively recruit its members and train them to run for this Local Station Board?”

Evidently in Goldmacher’s mind, if Greens had run for and been elected to the KPFA board, it could only be because the Green Party itself had set up a program for that. He demanded that the two Greens resign from the board.

So if Goldmacher was channeling a bit of Joe McCarthy, who was his Roy Cohn? That part was played by the board Secretary, Carol Wolfley. Both belong to the “UIR” faction that presently holds the majority on the LSB, and has filled all four officer posts (Chair, Vice-Chair, Secretary, Treasurer) from its ranks.

Wolfley opened the drama when she delivered her ”Secretary’s Report,” declaring, “we received an email…”  Who sent the email, or why that individual was so worthy of attention, was left unexplained. But what followed was a five-minute monologue implying that county-council members of political parties held “public office,” and thus were ineligible to sit on the KPFA board (the Bylaws specify that individuals holding “elected or appointed public office” aren’t eligible to be board members of Pacifica radio stations like KPFA).

Wolfley concluded: “there’s no proposal at this time because we’re still looking into the legal questions regarding this…”  Who the “we” is, and whether they were qualified to “look into the legal questions,” wasn’t specified. Wolfley’s UIR faction includes three lawyers, yet none of them spoke about the  matter. Probably they knew perfectly well that Wolfley was wrong:

Legal Definition of public office: an office created by a constitution or legislative act, having a definite tenure, and involving the power to carry out some governmental function.  – Merriam-Webster.com Legal Dictionary

But even though Wolfley had “no proposal at this time,” Goldmacher did:

“Is it appropriate for two people on the local station board who are elected officials of the  Green Party in the Bay Area to legally be serving on this station board?

I think Carol just made the case that that’s a violation of our Bylaws. I believe those two Green Party officials should immediately resign from the Local Station Board.”

Another Green on the LSB, Don Macleay, wasn’t targeted with Goldmacher’s demand for resignations, but he did answer Goldmacher’s accusation that the Green Party itself was organizing to win seats on the KPFA board:

“I’m one of the Green Party people, and if you’re going to make us out to be some kind of a vast Communist conspiracy, that’s about the funniest thing I’ve ever heard. The Oakland Greens have never discussed KPFA in a meeting, ever.”

And even if the Green Party had had an organized campaign to elect Greens to the KPFA LSB,

how would that have been illegal? In the past, multiple board members have been elected to the LSB from the Wellstone Democratic Club (running on the “Save KPFA” ticket, the forerunner of the present-day “UIR” faction), and no one alleged any lawbreaking.

Many KPFA members would probably find a lot to like about the policies Greens espouse: 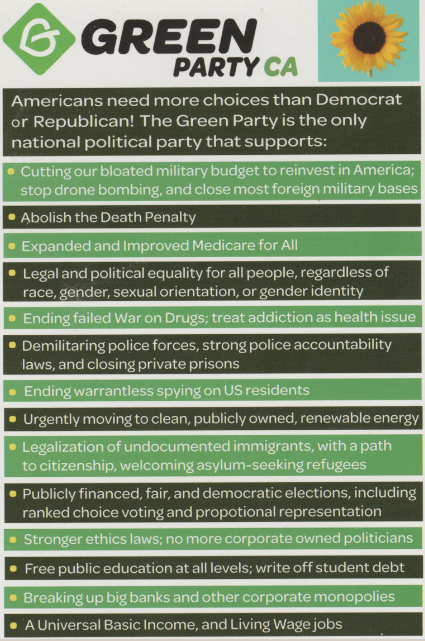 But Carol Wolfley had another card to play, this one actually more disturbing in its implications than misrepresenting the meaning of “public office.” She claimed that being on a party county council could actually be a “conflict of interest” with being on the KPFA board, because the party council member might not concur with KPFA management’s programming decisions:

“There may be a conflict of interest in situations where there is an attempt to represent both the interests of a political party and what is in the best interests of the station. For example, county council members from political parties may promote narrowing coverage and / or limiting airtime on issues. An example would be like with Supreme Court justice hearings and other political party conventions, which many listeners want and support…”

In fact, the Pacifica Bylaws give the KPFA Local Station Board almost no authority over programming,

so, no matter what a board member’s views about programs might be, there is no way to translate those views into action unless station management concurs and carries out the changes. Having been on the LSB for four years, Wolfley must know this.

And who decides “what is in the best interest of the station”?  For Wolfley, apparently, management alone is the decider of that, since holding contrasting views to those of the station manager is a possible conflict of interest. But then what is the point of having a 24-member board, if all the members’ opinions must be the same?

And while members like Goldmacher and Wolfley manufacture confrontations within the Board, they and their faction refuse to carry out some of the Board’s official duties. Under the Bylaws, the LSB must do an annual evaluation of KPFA’s General Manager and Program Director. Yet the board has actually done only one evaluation of the current GM (even though he’s held the job since 2014), and has never evaluated the PD.

So it appears that their overall objective is to waste the Board’s time on internal squabbles, while doing nothing at all about issues involving the radio station itself, or the wider world. At the same meeting where the LSB spent nearly 20 minutes on the bogus conflicts-of-interest allegations, LSB Chair Christina Huggins rejected a request (from a member of her own faction, Lily Kimura), that the LSB condemn the recent outburst of anti-Asian hate crimes in the U.S. Many organizations have issued such statements, but Huggins said,

“We don’t take positions on public issues, ’cause we’d be on them all the time.”

“A man was murdered, people have been brutalized, and if you guys call yourselves a community station, and you can’t make a stand… then I think you guys are really useless.”

Two days after the LSB meeting, KPFA management issued such a statement. Pacifica’s National Board did so soon after. So why did the KPFA LSB “leadership” suppress even a discussion of the issue?

The LSB didn’t meet in April (the majority UIR faction has decided to hold LSB meetings only every other month, the minimum required by the Bylaws), but it’ll meet again on May 15. Will the Ides of May deliver another episode of recklessness? Will Joe McCarthy’s ghost reappear? Will the board members with legal training speak this time? KPFA listeners can find out, and share their opinions with the board, by joining the LSB Zoom; look for a link at www.kpftx.org

Anthony Fest hosted Sunday newscasts on KPFA from 1996 to 2016, and was on the Local Station Board for three terms.